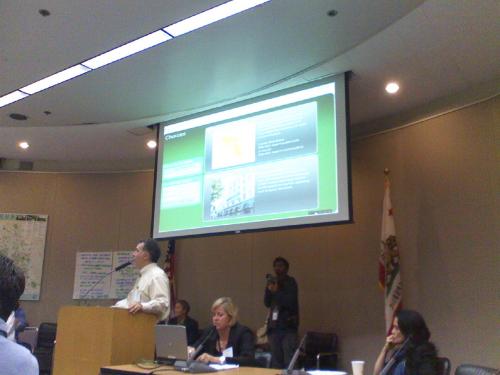 Attended MTC’s second Oakland spring workshop for Bay Area future planning and visioning tonight, May 24th, 2011.  The visioning process is called “You Choose Bay Area” which is part of ABAG and MTC’s “One Bay Area” project.  You can “vote” on the type of sub/urban future you’d like to see at the YCBA site. The workshop was from 5:30-8:30pm with basic box sandwich dinners provided.  Ham, roast beef, tuna and chicken. Tea was also provided…though not by MTC. I’ll dive into that later.

The purpose of this event (like the oversubscribed May 19th workshop I missed) was for residents of Alameda County to tell the MTC what they’d like their future to be like: Business As Usual or new and different.  How to prioritize land use and transportation options, policies and incentives and tax money.  Everyone did that quite well, though some less civilly.

The night’s most memorable negative feature was the sizable and obnoxious contingent of all-white* folks mostly from Livermore, Alamo, Dublin and other 680/580 suburbs. Some people might call these people “Tea Partyers.”  They were variously very dismissive, distrustful, extremely rude/shrill/loud/uncouth, (think Rush Limbaugh, Michelle Malkin, Sarah Palin and ten of their dittohead friends in a room), ignorant about fossil fuel realities and were completely “anti” MTC, public mass transit, planning, taxes, regulations and density. By re-arranging the letters in WASP, we get SAWP, or Super Angry White People. That’s what they were.

[*5/28/2011: At this point, let’s take a break and discuss race. I couldn’t help but notice that all the people who were loud, or anti-MTC/transit, happened to be white.  Does that mean the tensions in the room were due to race issues? In some people’s minds it very well could play a strong part. In a better read of the situation, it really boiled down to who was from newer  suburbs/exurbs, vs who was from older suburbs and urban cities.  Urban workshop participants were also largely white, but far more racially mixed (Asian, black, etc) given the more mixed demographics of the urban Bay Area.  I’m leaving the text as I wrote it, but keep this in mind. It’s more of a “inland vs coastal” sparring match. In microcosm, the US coasts vs the “heartland.” You can see charts of this I commissioned in 2008 for a city sustainability study.

Inlanders from the 680 valley were defending their car-based single family home way of life against decreased funding for them (which they’ve enjoyed for decades mind you), and increasing funding for less car-based, more “dense and convenient” ways of life.  I also have to note, based on the Bay Citizen story this week, that it is self-serving for Tea Party efforts to be led by a sales commission-based realtor… but still the main tension is over “The Economy, Stupid.” Also, there are no black UN (US) helicopters forcing people out of their SFHs and cars back into cities… economics alone do that. We’re in the “maturity and death” part of our society cycle right now. A new society will be born in the US by 2030. Now back to original post…]

You could say they were the ultimate version of that group of NIMBYs in North Oakland and Berkeley who frown upon any buildings taller than two stories or  Bus Rapid Transit. From talking to other people who tried to engage with them, and seeing their actions and hearing their words, I could see that they were there to get their point across to MTC (fine) but their manner of doing so was extremely rude. “Ghetto” would not be far from accurate. They were a riot. The irony! END_OF_DOCUMENT_TOKEN_TO_BE_REPLACED