What Lake Merritt/Chinatown junction could look like with enough pre-2007 level economic development. Photo by me near Tokyo circa 200?

Since VSmoothe is out to lunch and I’ve also been out to lunch… here’s transcript of tonight’s Planning Commission meeting about the Lake Merritt Specific Area Plan.  Good to see a lot of you Oakland blogospherians at the podium. By the way, this blog is mistitled a bit. It’s about redeveloping the Lake Merritt/Laney College/South Chinatown area, not just putting in street and bike improvements. But I’m not going to change the title now.  My smartass commentary below is inside [brackets]. 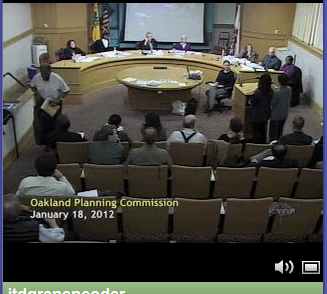 Go back in time, live on KTOP:

Tonight’s city hall presentation is a nice follow-up to my previous post from March 2011 about the  Lake Merrit BART Station improvement plan area.

END_OF_DOCUMENT_TOKEN_TO_BE_REPLACED

New Oaktown Backgrounder: The area between the lake and the SFBay estuary has always been in flux but for the past several decades has felt like a sad environment with nobody outside. The main park in the area is habited by homeless and transients, though sometimes with children and tai chi practicing elderly too. END_OF_DOCUMENT_TOKEN_TO_BE_REPLACED

I read today that City of Oakland has finally approved city-financed residential homeowner solar installation. Whoopee, we are finally up to par with City of Berkeley’s BerkeleyFIRST solar residential loan program.

I want to stress that while I love wind-solar-geothermal, these are not the cheapest energy programs available.  The cheapest home heating/cooling energy we have is Conservation.  That means, adding foam insulation with high R-values to apartment and SFH walls, roofs, caulking and taping leaky doorframes and electric outlets, and adding double-pane windows. (A prime candidate crying for implementation of this is the up-in-the-air Thai restaurant Sawooei in El Cerrito. Their slumlord won’t fix the front door which doesn’t shut all the way, right next to a gas-burning furnace heater, not to mention install 2-pane windowage. Comedy for energy nerds!)  The point is to avoid needing to use energy in the first place. END_OF_DOCUMENT_TOKEN_TO_BE_REPLACED